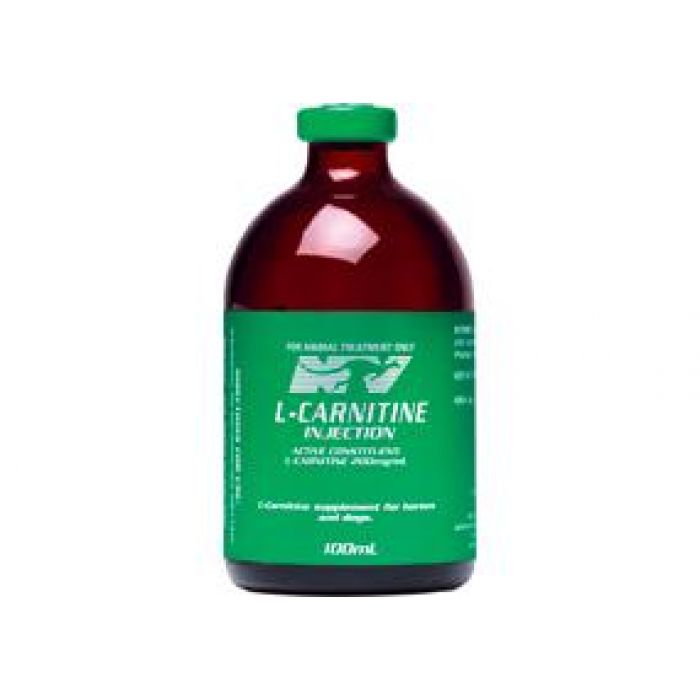 L-Carnitine supplement for horses and dogs

Dosage & Administration:
Adult horse: 10 mL
Dog: 1 mL per 10 kg bodyweight
Administer 2 -3 times weekly or as directed by your veterinarian. To administer, place syringe in corner of mouth and place dose over the back of the tongue.

L-carnitine plays a vital role in muscle metabolism during exercise. L-carnitine forms the transport system that moves fatty acid molecules into the mitochondria (furnaces) of the cell where they are burned for fuel (Strack, et al 1964). L-carnitine also inhibits the build-up of lactic acid in muscles, which helps delay the onset of fatigue (Brevetti, et al 1988). L-carnitine also helps with the oxidation (burning) of pyruvate and branched chain amino acids in the energy cycle (Bremer 1983) It also prevents the build-up of fatty complexes within cells, which can damage muscle cell membranes (Stumpf 1985).

The level of L-carnitine in the muscles plays a major role in determining the exercise capacity of the muscles. L-carnitine is also essential for normal heart function and L- carnitine supplementation is recommended for patients with heart failure (Kosolcharoen, et al 1981).