Every day we hear touching stories about the bonds between horses and humans, or the inspiritional achievements that horse and rider have made.   It is not only the high achievers that amaze, it is also stories of injured and unwell horses coming back to full health, discarded horses being given a second chance of finding a good home or young riders (and some older ones) taking on competitive riding for the first time.

Tim has been a lifelong equestrian. Like many, starting his days in Pony Club and then moving onto EA competition at the age of 11. Tim competed in Junior and Young Rider classes before transitioning into Open Competition. Tim now specialises in Show Jumping and purpose breeds Warmbloods for sport.

In 2012, Tim gained invaluable experience by working in a competition stable in Germany. This experience only furthered his belief that his horses should have the best of everything.  From feed and tack to education and general wellbeing. He presents and carries himself well and is an asset to the Team Herdz.

Tim competes in most major shows around Australia with top three results at both the Brisbane and Sydney Royal Shows.   Tim competed at all the World Cup Shows in Queensland in 2014 along with the Glen Haven Grand Prix Show at Kilcoy in late July. He also is intending to travel south for the major Victorian and New South Wales shows later this year.

If you see Tim competing at a show, feel free to give him a high five and say hello.

Kate is an International 3*** Three Day Event rider based in Queensland.

Kate's major achievements include competing in Australia's major International 3 Day Event at Adelaide in 2011, 2012 and 2014 on Papa's Dream. Wins and placings up to and including 3***.

Most recently Kate competes Global Victory who's major achievements include:

Starting to ride at age 6, Sheridan is a promising young eventer who has also just turned 18.  She is presently campaigning four horses and has successfully competed at various levels at the Melbourne, Sydney and Warwick Three Day Events.  Her aim for this year is to quallfy to compete in the  2** Class at the Adelaide International Three Day Event, the biggest competition of its kind in the Southern Hemisphere.

We know that competing at a high level takes a lot of commitment and we are proud to support young riders that display that commitment.

Alison's preferred discipline is the fast and exciting, Western Rodeo - Barrel Racing.  She is the current Queensland title holder for 2011 All-Round Champion Cowgirl, 2011 Barrel Racing Champion and 2011 Pole Bending Champion ranking her number 1 in Qld and 4th Nationally. Her competition horse has been a 17yo 16hh bockskin QH Gelding called 'Link' but recently purchased a new competition horse, a 10yo QH mare called 'QT'.

Alison started competing at rodeos when she was 8 and now that she as just turned 18, she is commited to stepping up to the 'Open' classes and performing at her best with her two horses.

Whether it be with rider sponsorships or by providing appropriate performance supplements, Online Horse Supplies is commited to supporting young riders and their horses, develop and reach their full potential.

Online Horse Supplies is pleased to provide a sponsorship to Rhiannon Mussig for the 2011 year.

Rhiannon also received a scholarship award which was selected nationally from the Arabian Horse Society of Australia, the 'Youth Ambassador Award for 2011'.  This has been her dream and goal for the last year.

Rhiannon says "I love horse riding and showing horses.  I first rode a horse when I was 4 years old and from then on, I always wanted to ride.  I started showing and competing horses in dressage and at hack shows when I moved from Darwin to Brisbane in 2004.  I compete in EFA dressage events, Arabian shows and Agricultural shows throughout the year and aim to become part of the Dressage Squad.  One day I hope to ride for Australia in dressage."

On 14 May 2011, Rhiannon competed in the Samford Equestrian Group member's competition.  She achieved a 1ts Place Preliminary 1C and Novice 2C and overall winner Novice and Preliminary.  On 15 May 2011, Rhiannon competed in a One Star event at Caboolture on The Alchemist.  They were placed 3rd in the Pony Dressage 1C and 2nd  in the Pony Dressage 2B.

On 30 July 2011, Rhiannon competed at The Downs Arabian Club Youth & Amateur Show at Laidley and was Champion Open Bridle Path Hack.  She is now preparing for the Brisbane Ekka.

We understand the commitment and cost and we are proud to be able to support Rhiannon as she strives to reach her goals. 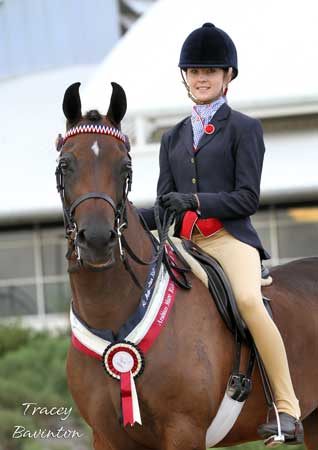 Online Horse Supplies is pleased to provide a sponsorship to Shannae Petersen for the 2011/12 year.  Shannae is an active competitor and member of the Burpengary Western Performance Club where most weekends you will see her and her horse Suthern Justincredible aka Justin either competing or attending clinics.

Shannae says "Before I could even walk I was in the saddle.  I started competing in the western lead line events at the local shows when I was only six years old and continued on from there."

Shannae considers her top personal achievement has been the training of her horse Suthern Justincredible.  She purchased him as a green broke 3 year old and has worked with him and trained him to become very successful in a range of different Western Performance events.

Her major achievements with Justin have been winning Hi Point Senior Youth at the past two Appaloosa State Championships and also competing successfully at the 2011 Appaloosa National Championships where she received Champion in Western Horsemanship, Western Equitation, Showmanship, Hunter Under Saddle, Hunt Seat Equitation, Hunter Hack, Hack and Novice Dressage.

Her ambitions for this coming show season are to attend the 2012 Appaloosa National Championships in Tamworth and the 2012 Appaloosa State Championships.  She will also be competing at the Queensland All Breeds State Show at Nambour in August and the National Pleasure Horse Association National Show in Sydney later in the year.  She is also aiming to attend the Australian Quarter Horse Nationals with her Quarter horse yearling who she is currently training to compete in the versatility classes.  Her ultimate ambitions are to continue to train her horses and one day compete at the World Show.

We are proud to be able to assist Shannae and we wish her all the best as she strives to achieve her goals.

We were very pleased to be associated with this years Fig Tree Pocket equestrian Club ODE in July.  W very sucessfully event was hosted by the hard working team at Fig Tree Pocket.  Congratulations to all the winners.  It was great to witness some of the competition.

We are proud to be associated with the Australian Warmblood Horse Association again with a Silver Sponsorship of the AWHA NSW Gala Day - Warmblood Show on Saturday, 24 September 2011 at the Sydney International Equestrian Centre, Horsley Park.  Good luck to all competitors on the day.

We were proud to be a sponsor of the 2012 Australia National Morgan Horse Show held at the Toowoomba Show Grounds 16 March 2012 until 18 March 2012.  We congratulate Mt Tawonga Oscar with handler Olivia Smith who won High Point Pure Bred of show & Silver Buckle for the Versatility Challenge.

Online Horse Supplies is proud to be associated as a Gold Sponsor of the Samford Equestrian Group (SEG).  During the year we support SEG with prizes for competion days and raffle.  We also thank the members of SEG for supporting Online Horse Supplies.

We have been proud to support the Matthew Flinders Anglican College with some prizes for their 2011 Show Jumping Challenge.  Held on 3 September 2011, this is the 7th year that this inter school charity event has been conducted.   All proceeds went to the Sunshine Coast Children's Therapy.  Congratulations to the organisers for their hard work in conducting another successful event.   Pictured below is Morgan Moyes with one of our prize vouchers. 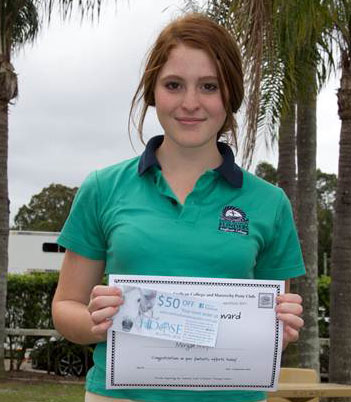 In October 2011, we were pleased to support the Miniature Horse & Poney Enthusiasts of Australia, with a raffle prize for their 2011 Annual State Championship Show in Sydney.  Congratulations to all the winners on the day.

In November 2010, Online Horse Supplies donated a gift voucher to the Western Horse Forum www.westernhorseforum.com to be used as an auction item on the Dave Galvin Fundraise Show.  Dave tragically broke his neck in a freak accident while playing with his kids at the beach.