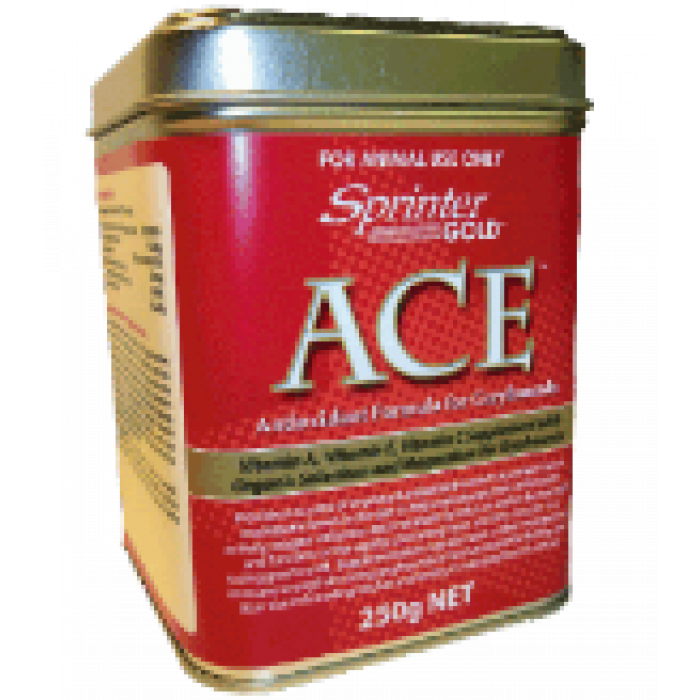 Rating:
0% of 100
0 Review Add Your Review
Special Price $25.95 Regular Price $36.50
Availability: In stock
SKU:
SG-ACE250
Sprinter Gold ACE is formulated as a specific antioxidant supplement to complement the comprehensive antioxidant contribution made by a daily dose of Results Plus to a greyhound’s diet. If you are not using Results Plus daily, you should provide ACE as a daily antioxidant. The addition of ACE as a specific antioxidant ‘boost’ to the diet in the pre-race preparation helps to maintain optimum muscle function and stamina on race day, as well as during the post-race recovery period.
Add Item to Wishlist Email to a friend
Notify me when the price drops
Details

When greyhounds are racing at full speed, up to 2 litres of oxygen per 30 seconds is taken up from the lungs and carried by the red blood cells to the rapidly contracting muscles to cross the thin, fat (lipid) layers of the muscle cell wall into the muscle to fuel energy metabolism.

The high concentration of oxygen transferring through the cell walls can damage the polyunsaturated fat (lipid) layers and result in harmful free radical formation, which in turn causes inflammation, enzyme leakage and loss of muscle contraction speed and strength  all which directly affect performance.  Vitamin E, selenium, Vitamin C and Vitamin A all contribute to the antioxidant protection and help to maintain stability of muscle cells under high oxygen transfer rates during sprint racing. Greyhounds receiving a low or inadequate intake of muscle antioxidants are prone to muscle related problems, such as weakness, lack of stamina, early race fatigue, muscle cell damage and cramping.

ACE™ has been formulated as a complete antioxidant formulation, just not a simple Vitamin E supplement!

ACE™ contains the most potent natural source RRR form of Vitamin E, organic selenium (fully chelated), Vitamin A, Vitamin C and organic magnesium, as well as potassium, which have roles in maintaining the stability and function of muscle cell membranes, including the heart muscle.  By optimising the utilisation of oxygen and  minimising harmful free radical formation, these nutrients can optimise the efficiency of oxygen utilisation within rapidly contracting muscle cells. Special pre-race dosages of ACE™ are recommended to help maximise antioxidant activity during racing.

Sprinter Gold ACE is a new concept as a complete antioxidant nutrient package for racing greyhounds.

It contains the full range of antioxidant nutrients which help to maintain the muscle cell walls of rapidly contracting muscles against damage by harmful reactive oxygen molecules as a greyhound races. It features a high content of totally natural source d-α-RRR-Vitamin E, as well as Vitamin A, Vitamin C and organic selenium to help maintain optimum muscle function during and after racing. It is a “new” generation over traditional Vitamin E supplements as it is formulated to help maintain maximum antioxidant activity within the muscle environment during strenuous exercise.

Q. The formulation contains a full range of antioxidant nutrients. How do these act to help protect muscle cells against oxidative damage during exercise?
A. Supplementation with Vitamin E only helps to control the first stage of fatty acid oxidation. By including Selenium and Vitamin A in the formulation, any peroxides formed during the first stage are effectively prevented from progressing to harmful superoxide compounds.

When a greyhound is racing, up to 2 litres of oxygen is delivered by the red blood cells to perfuse through the thin muscle cell membranes in a 30 second race. The high rate of oxygen diffusion into the muscle cells during galloping increases the potential for oxidative damage to the lipid or polyunsaturated fatty acids which constitute the muscle cell membranes. Uncontrolled oxidative damage can lead to the formation of peroxide and harmful superoxide radicals as outlined above. These damage the integrity of muscle cell membranes and can lead to inflammation, enzyme and potassium leakage resulting in soreness and lack of strength, early race fatigue and even cramping.

Did You Know that Vitamin E and other natural antioxidants are low in meats and cereal ingredients used as a basis for a greyhound’s diet? Furthermore, freezing meat destroys its vitamin E content on thawing.  The heat processing of cereal grains in the manufacture of dry dog foods also destroys much of the vitamin E and vitamin A content. Vitamin E is one of the most important vitamins in a greyhound’s diet and one which has the most benefit for optimum race performance and recovery. Studies suggest that the diet of a racing greyhound should contain at least 50IU of vitamin E per day, with up to 100IU of vitamin E daily in preparation for racing.

Q. How can I recognise if a supplement has natural source or synthetic vitamin E in the formulation?
A. The natural source forms of vitamin E are chemically classified as ‘d-α-tocopherols’ to identify them as being obtained from natural plant sources, such as soyabean oil.  The cheaper less active synthetic forms are classified as ‘dl-α-tocopherols’ and must be labelled as such on the label. If a product declares vitamin E without the reference ‘dl-α’ or ‘d-α’, chances are that it contains the cheaper synthetic ‘dl-α’ form of vitamin E.

Q. What is the d-α RRR form of Vitamin E as listed on the label?
A. The natural source Vitamin E derived from soyabean oil, in the d-α-RRR form of Vitamin E, is considered the most biologically available during digestion and the most active in the tissues as an antioxidant. It has a Vitamin E activity rating of 2 times greater as compared to other forms of Vitamin E. It is also oil soluble and can be stored in the fat of the body and within the muscle cell fatty acid content to provide rapid antioxidant protection during exercise. The RRR form of natural source Vitamin E is very stable during storage and retains its activity for longer as compared to other forms of vitamin E.

Q. ACE appears slightly oily as a soft powder. Why?

A.Small amounts of highly refined GM free canola oil, which is not prone to oxidation of its own fat content, is used to provide fat to optimise the uptake of Vitamin E during digestion in the small intestine. Dry lactose based powdered supplements of Vitamin E, even natural Vitamin E succinate, do not have in-built oil to ensure optimum Vitamin E uptake.

Q. Why include organic selenium? What are its benefits?
A. The trace-mineral, selenium is required in very small amounts as a structural constituent of the muscle antioxidant enzyme glutathione peroxidase, which prevents second stage oxidation of muscle cell fatty acids. In ACE, an organic form of selenium in enriched yeast cells is included in the formulation as selenomethionine and selenocysteine complexes. These are the forms which have greatest biological action and the safest to incorporate into feeds and supplements. The commonly used inorganic or chemical forms of selenium, such as selenates and selenites, may be cheap, but when mixed into feed, they have a pro-oxidation effect by actually fostering oxidation of other oxygen sensitive compounds in the feed and during digestion. The inorganic or chemical forms of selenium are not absorbed as well as “organic” chelates, as in selenium yeast, which is used in the ACE formulation. Excretion of the poorly absorbed selenites also poses a problem in the environment and waterways, which can have a direct effect on the ecosystems and aquatic animals. The excess of organic form excreted is taken up naturally by plants and animals in the food chain as a safe selenium soil and plant nutrient.

Q. It contains Calcium ascorbate as well. Why?
A. Calcium ascorbate is considered the most active and stable form of ascorbic acid or Vitamin C. Vitamin C has a number of benefits as a nutrient required for cartilage health, blood vessel elasticity and as an important muscle cell antioxidant. It acts to regenerate Vitamin E within the muscle cell membranes as it is denatured by highly oxidative conditions, allowing Vitamin E to maintain its optimum benefit in protecting rapidly contracting muscle cells and assisting recovery after a race.

Q. Why is Vitamin A included in the formulation?
A. Vitamin A is also involved as membrane stabiliser in the muscle cell membranes and it too, like vitamin E, is often low or inadequate in common greyhound diets to meet the needs during strenuous exercise and repeated racing. It acts synergistically with Vitamin E in maintaining the integrity of the muscle cell membranes during exercise. It is also essential in protecting the selenium containing enzyme glutathione peroxidase against damage during rapid muscle activity. Vitamin A is important for optimum blood vessel strength and elasticity, along with vitamin C.

Q. Why is organic magnesium included in the formulation?
A. Chelated organic magnesium is well absorbed from the small intestine without interference from calcium and iron in the digestive environment. Magnesium is also required to help maintain optimum stability of muscle cell membranes during exercise.

Q. On the label, it suggests to avoid mixing ACE into the same area of feed as a liquid supplement containing iron and copper. Why?
A. Iron and copper are highly destructive to Vitamin E and Vitamin C, the primary antioxidant nutrients in ACE. It is best to give ACE in a separate meal, such as breakfast, and the iron and copper supplement in the evening meal.
Note:- In a supplement, such as Sprinter Gold Results-Plus, both iron and copper are in a fully organic chelated form to help reduce this destructive interaction within its own formulation. The particles of RRR-form of Vitamin E and the ascorbate source of Vitamin C are coated with a gelatine layer to protect against and prevent against any likelihood of chemical interaction within the formulation.

Q. Is it beneficial to give ACE prior to racing?
A. Yes. ACE is recommended on a daily basis for greyhounds in training to maintain the muscle cells. ACE can also be given at a higher dose rate (6g daily) as a pre-race dose on the day prior to, the day of racing and the day after racing, to optimise antioxidant activity during the period of maximum muscle activity when racing.

Q. Do other greyhounds benefit from ACE?
A. Yes. Supplementation with ACETM may also have a role in maintaining immune strength in racing greyhounds in hard work, as well as the fertility and litter size in breeding bitches and fertility in male greyhounds at stud when the diet is low or inadequate in Vitamin E.